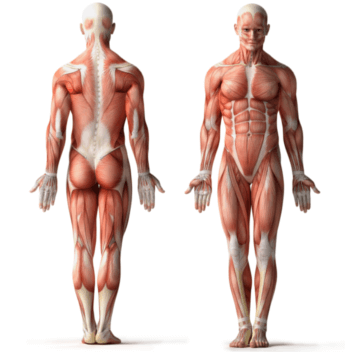 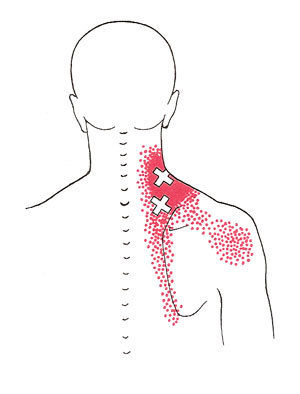 The neck supports your head (which weighs about 6 kilos) and allows your head its great range of movement. The vertebra, discs and muscles of the neck allow all these movements to take place. Also, the neck muscles support the head in all sorts positions, often for sustained periods of time.

It's unsurprising that neck pain is a frequent complaint. Fortunately, the majority of neck pain can often be helped with Osteopathy and Acupuncture.

There are a large variety of causes for Neck Pain:

This is where the muscles that support the neck play up, and cause stiffness, neck pain and possibly a headache. The discomfort can spread to the shoulder, arm and upper back. While this neck pain will often settle down on its own in a day or two, if it lasts longer it's often a good idea to have it treated. 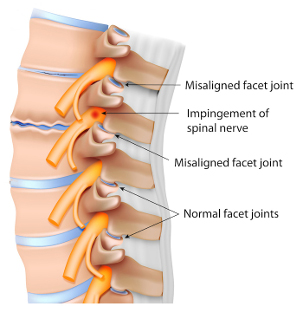 The facet joints are small joints at the back of a vertebra. When a facet joint in the neck is moved beyond its normal range of movement, the ligaments supporting this joint are overstretched and, in turn, the muscles that support the neck go into a protective spasm.

This will cause neck pain and stiffness. When this happens the pain may also be felt in the head, shoulder, the arm.

This condition can be very painful, but will usually respond quickly to osteopathic manipulation.

Whiplash is commonly associated with Car Accidents, where a car is hit either from the side or from behind, although these injuries can be sustained in many other ways, including falls on ice and during sport.

These injuries are complex, and the onset of symptoms can be delayed by a day or two, so everyone involved in a Car Crash should be examined by a Doctor and have an x-ray to rule out serious injury.

Whiplash can best be described as "A sudden acceleration or deceleration applied to a human body which is not prepared for such an event."

The idea of lack of preparedness is significant, as the bodies protective mechanisms are just not ready to cope with the instantaneous impact of collision.

The muscles, ligaments, vertebra and discs in the neck are all potential tissues that can be damaged. It is not unusual for the lower back and pelvis to be involved, as all the spinal tissues are trying to support the head and neck during the whiplash episode.

Osteopathy, Acupuncture and Cranio-Sacral Osteopathy can frequently help with the various issues that occur after a Whiplash Injury.

Spondylosis is usually associated with elderly people, and people who have had experienced injuries to their necks. The ageing process should not be painful, and it's a cop-out for medics to say things like "This Pain - It's because of your age". Many people have spondylosis and are pain-free. The neck pain that's attributed to wear & tear is often muscular and should respond well to osteopathic treatment. 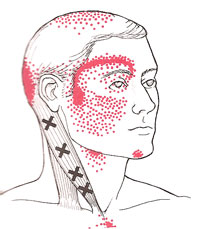 Prolapsed Discs in the neck:

This can be a very painful condition as the nerves that run from the neck to the shoulder and arm are often affected. There may be pain, numbness, pins & needles and even weakness in the arm and hand. It can be very difficult finding a position to relieve the symptoms.

This condition can be very difficult to treat, and in the acute stage certain pain-relieving can be helpful. A neck collar that lifts the head up from the shoulder can add traction to the neck and relieve compression to the affected nerve. Sleeping on your back with something to lift the shoulder up can relieve traction to the affected nerve. It is worth seeing an experienced osteopath for advice, but it's unlikely they will be able to treat a genuine cervical disc prolapse.

Headaches from the Neck.

Muscles at the front of the neck:

The muscles at the front of the neck can cause pain around the face and jaw, and can easily be overlooked in cases such as TMJ syndrome, one sided tinnitus, or the feeling of something stuck in your throat (globus) and facial pain.
The muscle that forms the floor of the mouth, the Digastric muscle, can also cause issues around the front of the neck and with swallowing. These muscles can be treated using acupuncture.

The Scalene Muscles, which run from the front of the neck to the upper ribs, can cause pain and numbness in the shoulder, arm and hand. This muscle is often involved in people who are hunched over, in a bad posture, at a computer. 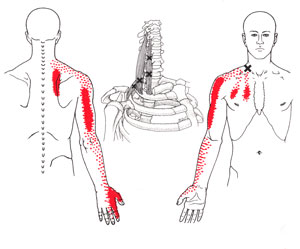